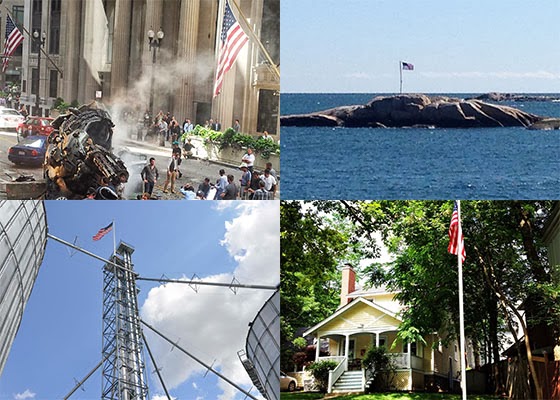 We Just Like People Who Fly Flags and that is you because you have your flag story out front.

Here are 4 features for you to see how others are making the most of their flag display and how it is paying off.

1. Ready For The Blockbuster! Transformers 4: More Than Meets The Eye... For The Flags 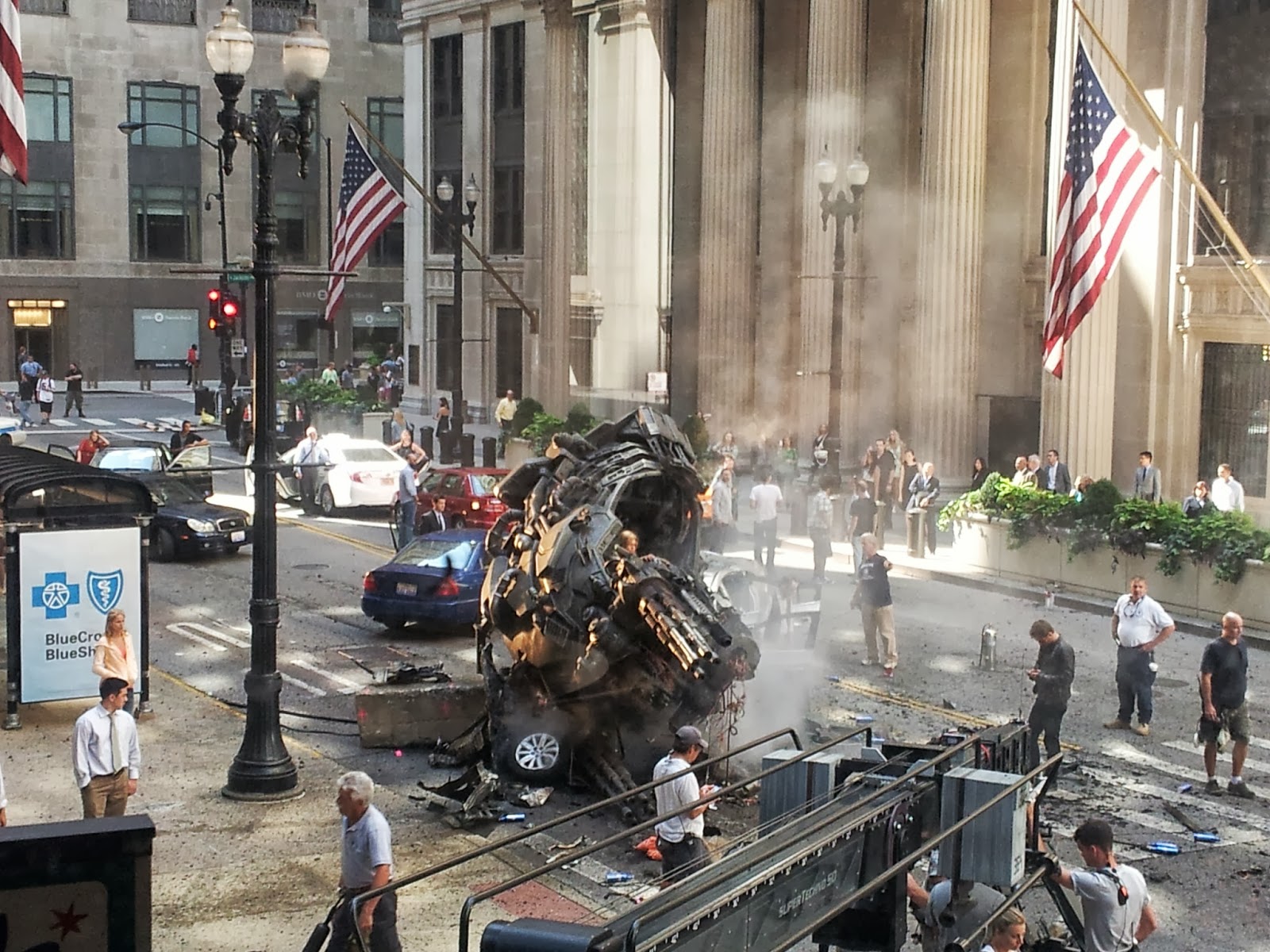 The recent movie series, Transformers has carried a distinct pro-American theme. These block buster movies have featured an impressive military tone; with disciplined and virtuous soldiers who, while not always agreeing with their superiors, always have the safety and freedom of American citizens as a top priority. This theme permeates in the messages of the good robot aliens, while the bad robot aliens portray slavery, deception, and dictatorship rule.

So when the director, Michael Bay planned the shoot in downtown Chicago, it was important that the US flag look perfect. Not only do the messages and themes of the movie appeal to American idealism, there are product placements such as Blue Cross and Blue Shield and Bud Light which appear as features in these scenes. Then when the American Flag is placed with these products, there is an association made, perceived by the audience. These companies support this American idealism. Somebody is saying "ah, the kids are our future".

2. From Hurricane Sandy to the Boston Marathon Bombing


As runners, 2013 struck close to home when there was a bombing at the Boston Marathon. The Boston Marathon is one hallmark for long distance runners. To qualify and gain entry into the "Boston Marathon" is to also place yourself in an elite group of dedicated athletes. The commitment requires you to prove you've got the metal by an age-based finishing time system. This is controlled in advance through sanctioned recognized 26.2 mile qualifying race events. Qualify in your age group in one of these races and prove it and you can get a race entry. While other Marathon races are open and may have more runners, the Boston Marathon is a sacred symbol. The bombing of this particular race shook the foundation of every subsequent Marathon ran in 2013.

The flag (shown above) symbolizes the memory of the victims of this act of terror and as well the natural disaster along the eastern seaboard from Hurricane Sandy. It is a sign of respect and perseverance. Bad things can happen in our community, but with a wide enough view, we can see a light at the end of the tunnel. The victims and their families of both these tragedies deserve more than a few weeks of media coverage, but a continued bridge of support. The flag out front can help do that. You are all flag flyer's and you help do that in your community too!


Where once there were flat plains, only prairie long ago for many miles around now groomed into corn fields and farms. Amidst these fields stands a 196 ft. tower flag pole and, you guessed it, a flag out front, now a mountain of a landmark. Like the top of a mountain, it can be seen for miles around when driving to Grainergy, a state of the art grain facility. With various types of anchorage, it is possible to put a flagpole almost anywhere. For this application, a heavy duty 50' flagpole with a shoe-base made it possible for the flagpole to become an extension of the already grounded 144' tower. 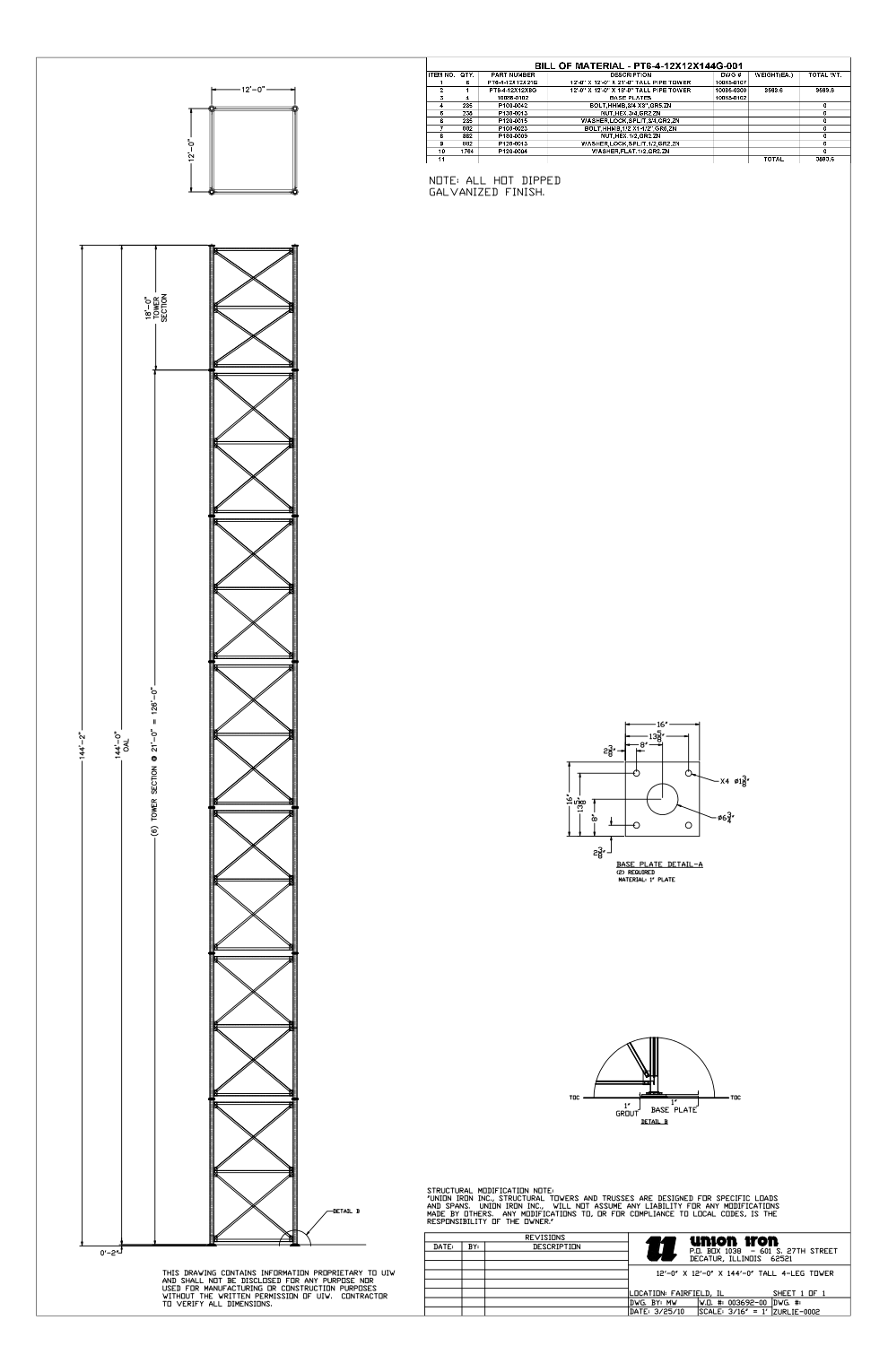 [A shoe-base is a welded base plate designed to fit onto a bolt pattern. The flagpole is lifted and placed over these anchor bolts and fastened with stainless steel nuts.]

In addition to anchorage, there are various types of flagpoles. For Commercial Aluminum Flagpoles, there are two types, internal and external.  The internal version is considered the deluxe and the external version is considered the standard. The difference is the flag hoist system. For this project, the external hoist system was best because we could bring the halyard (rope) system all the way down to the ground and change the flag without climbing the 144' ladder.

With 15 - 20 MPH steady wind up top, as well as the series of tornadoes, gust of wind, and bad weather that have hit in 2013, keeping a flag flying is not an easy task. But the newly designed Eagle Poly II American Flag with reinforced corners and extra stitching at the fly-end proved tough enough. Combined with changing the flag for re-hemming, checking weather and taking the flag down, this flag display has stayed beautiful now for years.


4. Labor Day of Love, Is a Make Over At A Hinsdale Homestead 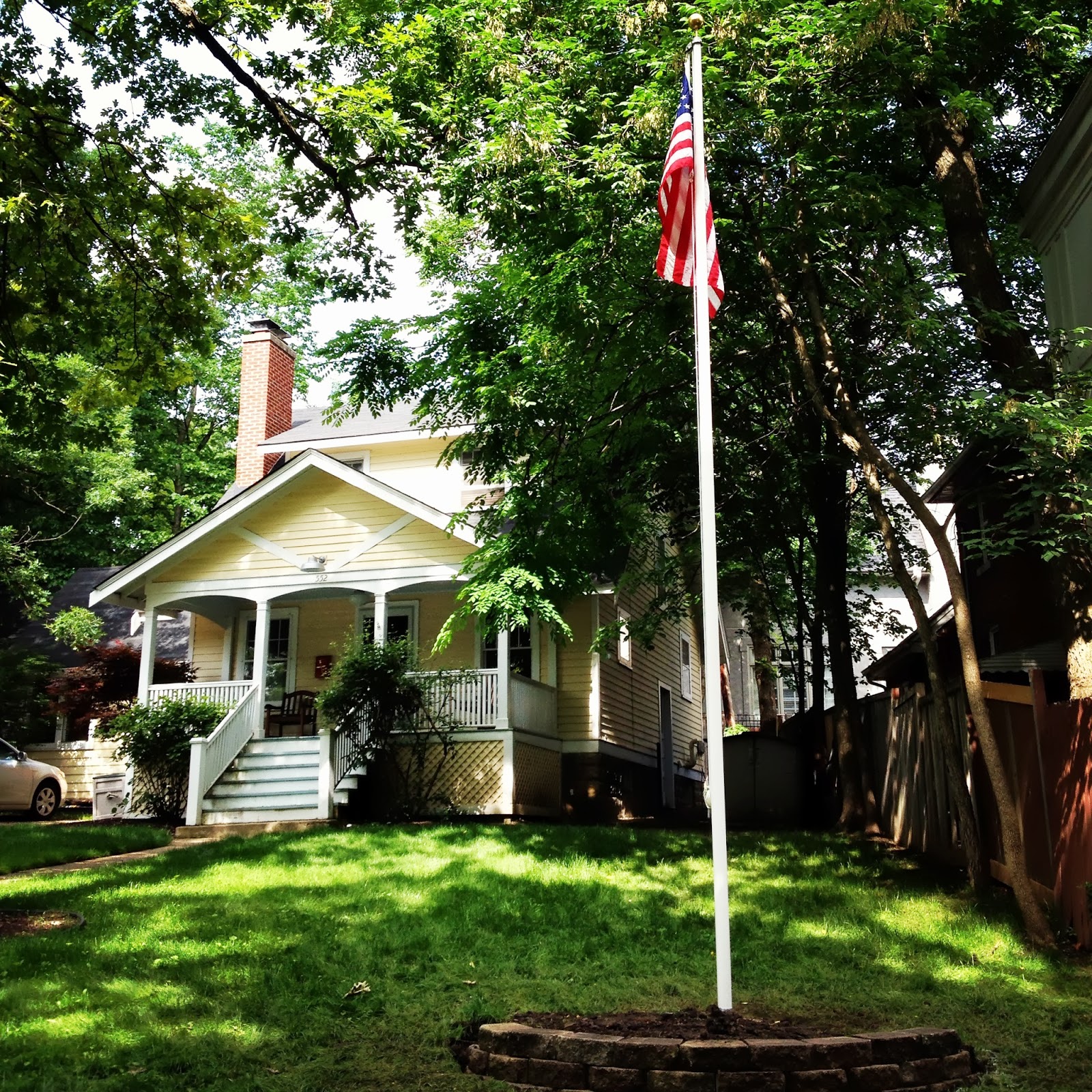 Sometimes a great flag display out front can be a terrific make-over and make the difference. Buying a fixer-upper in a well-kept neighborhood has its advantages and disadvantages. This family took the run-down corner lot and transformed it into the warmest welcome on the block. The flagpole both hides the old tree stump with a stone accent wall and reinvents the external mood of this home overnight.
__

These are just some examples of why, "We just like people who fly flags". Flag flyers like people who fly flags too, this has been a marvelous realization. This past year has come with great moments and devastating tragedy. Us flag flyers are not just there for the good times, we as Flag flyers are always there, and going to be there. That is why you fly the flag, it lets people know where you stand. And this is one reason we are here to recognize the commitment of a having a flag out front.
Posted by Unknown at 12:32 PM