The Mission: Install a 50 foot tall flagpole on top of a 144 foot tower, strong enough to hold a 300 square foot flag with constant wind speeds of 15 to 25 mph.

FlagRunners are in Geff Illinois, a small town in the Midwest with a large agricultural presence. We were drawn here by the 6 foot shy of 200 foot landmark that could be seen from miles around. And after about 6 months of hard work and creative engineering, a flag flew over Grainergy Farms. In this video, we discuss with Nick Zurliene, the lead engineer on this project and head of Zurliene Enterprises, Inc. how he was able to install such a tall flagpole. FlagRunners had the great fortune to visit one of these facilities and climb the 144 ft. tower to where a 50 ft. flagpole was secured and flying a beautiful 15 ft. x 25 ft. American flag.


When we think of a tall flag pole, a really tall flag pole, we think of 100 ft. large steel sectional monsters which sit in lot, flying 20 ft. by 38 ft. flags or larger. These flag poles are impressive, with 13+ inch butt diameters. But a tall 100 foot flagpole is not the only way to hoist a flag into the stratosphere. What makes the Grainergy flagpole unique is how it utilizes it's grain tower to turn a 50 foot flagpole into a nearly 200 foot tall expression which is viewable for miles around.

Zurliene Enterprises, Inc. was able to accommodate us. 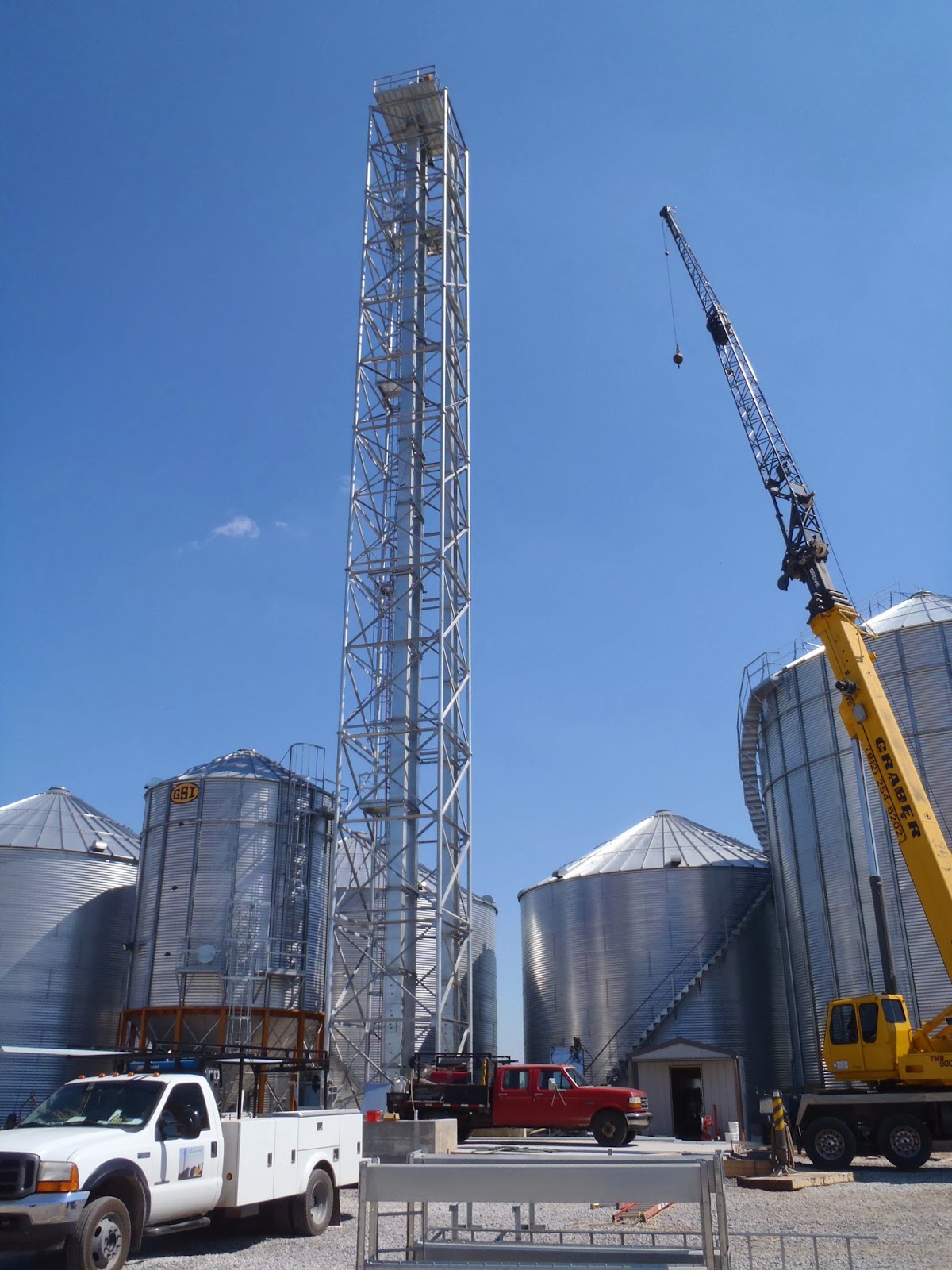 Like skyscrapers in a sea of golden brown fields, granaries tower the landscape and are visible for miles. There were quite a few things that brought this particular project to our attention and we wanted to share with you how these flag flyers solved the rather daunting task of flying a 300 square foot sail from 194 ft. in the air. Many of the parts that made this flagpole engineering feat possible were crafted on site and custom made for the flagpole as well as the bolt pattern of the tower itself. To recap the video, we will take you through, in some greater detail, exactly what our concerns were and how

A standard shoe base (shown to the left) is anchored by a set of four bolts. Luckily, the grain tower also had a four bolt pattern on each of it's 144 foot legs. A custom shoe base matching this four bolt pattern had to be drafted. The flagpole would ultimately be delivered with this shoe base welded to the bottom of the flagpole. While anchor bolts seated in cement have enough structural integrity to match an in-ground flagpole galvanized foundation sleeve installation (for standard commercial flagpoles), the tower was another story (no pun intended). Additional anchorage elements would have to be custom made to simulate the strength of a cement ground foundation. Not only was it important to match a ground cement foundation, but we would need to go above and beyond, as the flagpole would be installed 144 feet in the air, with completely different wind load factors. 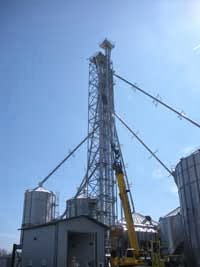 Zurliene Enterprises, Inc. custom welded a galvanized still rod with a plate on the top end. The plate matched the dimensions of the shoe base as well as the bolt pattern. The galvanized rod was hot dipped to prevent corrosion of the aluminum flagpole from the rod. This rod was then lifted by a crane and dropped into the column of the tower where the flagpole was to be installed. With the flange in place, the flagpole was raised and anchored.

The flagpole was installed on the most structurally secure beam of the four columns. But now, however, torque on these columns was very unbalanced, as the flagpole-installed column carried much of the burden. It seemed we needed one additional anchorage element to even out the loads on the grain tower columns. Custom collars with beams were tightened around the flagpole about 8 feet from the base. These collars were anchored to the two adjacent corners.

With steady 25 mph winds, you can feel how each one of these anchorage elements plays a role in keeping the flagpole secured to the tower, as well as keeping the force on the tower as even as possible. Other standard hardware components help to reduce the load on the tower as well. The revolving or non-fowling truck reduces the resistance on the flag. The external halyard also provides a little give to the flagpole.

This flag story doesn't stop with installing a flagpole. Granaries all over the country fly flags on top of their elevators. Most of these elevators' flag poles are left over steel pipe, 20 feet in height and are bracketed to the railing of the top of the tower. When we see this, we ask two questions.

What size flag do you want to fly?

When you've been a flag flyer for years, whether you are a corporation or just flying a flag out of your home, you know the most important thing is that your flag looks good and lasts a long time. What limits your flag life more than anything else are obstructions. Your flag should fly free. And by free, we mean with the least amount of objects that it can run into. Blunt metal is particularly bad for a flag. That is why we ask everyone to check their flag pole hardware and make sure it does not have any rough edges. Before a multiple flagpole project is drafted, we encourage the architect to place the flagpoles apart with ample room so the flags (whatever size they are) do not run into each other.

If you have a grain elevator with a steel rod, 20 feet tall on the railing of the top of your tower, you may be limited to fly a 8 x 12 foot flag. The 8 x 12 feet requires a 15 foot radius. The next size up, 10 x 15 foot flag, needs about a 20 foot radius, which would be cutting it too close. While an 8 x 12 foot flag is fairly substantial on the ground, 200 feet in the air, it looks like a 3 x 5 foot flag from the ground. If you are going to put a flag a couple hundred feet in the air, you want to put up a flag that is impressive and can be seen for miles around.

How are you going to replace the flag once it wears thin and frays?

As FlagRunners, we travel to all sorts of flag displays and see all sorts of contraptions. Some make flag flying easier, while some just make flag flying possible. In the case of many granaries, replacing the flag can be a several man, couple hour job. Climbing to the top of the tower, using winches, cranks and all sorts of gadgets. When there is a strong, steady wind, replacing the flag can also become dangerous. It is best to set up a system that makes it easier and most importantly, safe. That is why, on this job, we supplied extra halyard or flag pole rope, for the flag. This halyard runs all the way down the tower to the ground. This way the flag care person can replace the flag securely from the ground. Even from the ground, it can take two people, though.
Posted by Unknown at 12:18 PM