Home » »Unlabelled » #Transformers 4: More Than Meets The Eye... For The Flags

#Transformers 4: More Than Meets The Eye... For The Flags 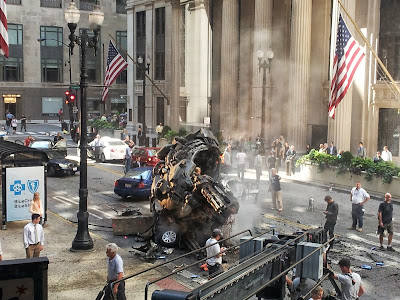 Beautiful day for a film shoot in the windy city. While staged battles were being shot, the real battles were in the preparations. Turning cars over, coals in barrels to produce a smoke effect, and yes, flags changed out to look perfect for the day... 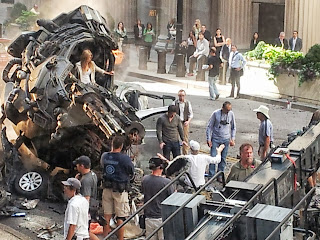 Four giant 10 x 15 Polyester (as we get ready for fall) American flags framed the scene as Michael Bay shot his upcoming block-buster, Tranformers 4.This round features Mark Wahlberg, scheduled for theaters 6/27/2014. As the film was being shot, barricades block pedestrians from view of a day of staged explosions and action scenes.

In this scene, we see Mark Wahlberg, Nicola Peltz and Jack Reynor in an alien vehicle which has crashed on top of a car. Littered on the ground are Bud Light bottles for a Bud Light truck explosion.

As the Chicago Tribune put it, "Chicago was well represented on the set Saturday..." On hand for the shoot were taxis, police cars, even a bus advertising the event. But FlagRunners got a front row seat to make sure the flags looked right. 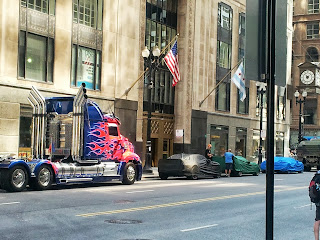 Normally, these style of flagpoles, Outrigger, have a device known as a non-tangle rod. These rods help keep the flag under control. But this weekend was not a particularly windy one, given it's nickname. And the battle scene called for some action, so these rods were disabled as a fan was dedicated to getting some motion out of the flag.

Not but a few blocks away, we were able to get a shot of Optimus Prime before they covered him up. Again, beautiful custom colored Outrigger flagpoles anchored in the wall just above the vehicles with an American flag and a City of Chicago flag. 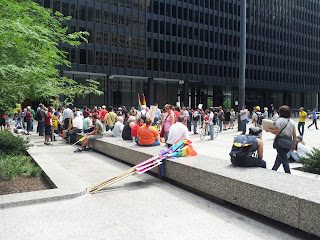 But Tranformers 4 was not the only event with flags this weekend in Chicago. Just down the street at Daily Plaza, a rally was going on to protest action in Syria. Rainbow flags (symbolizing peace), hung on wooden steaks with cardboard signs taped across the middle. Anti-war chants were heard as we ran out to the lake front path and northward back to FlagDesk HQ.

Below is another scene featuring the American flag. Take a look! Also, I hear Tranformers 4 will introduce the Dinobots.