Update! What we THOUGHT was the Northside Hispanic Ministry was in fact the Barnes Hiscock Mansion (formerly the Syracuse Corinthian Club). In 2009 this mansion was acquired by the George and Rebecca Barnes Foundation. We did not see that the sign in front of the building was referring to the building on Green Street just down the lot (which has since been removed). Since we were out there last winter, it appears changes have been made to further restore this mansion and take care of its property. Thank you Karen for your information.

The flagpole, was a gift from Senator John A. DeFrancisco. The senator was first elected into office back in 1992. He focused on community awareness, commitment to fiscal responsibility, campaigns to reduce crime/welfare, as well as encourage government transparency. All of these issues are still the focal point today, over two decades later.

This is a testament, flagpoles don't have to be new, to be up-to-date. The building looks more like a plantation home on James street in Syracuse, New York. And while the years have been tough on this building, the upkeep and appreciation for the space is clear. 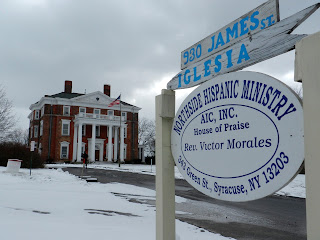 Steel flagpoles are very old. They date back many years. Rust and wear can be seen in many of the foundations. This has led to some problems in the past with flagpoles failing, falling over from neglect. In the heart of Syracuse, a building like this would typically be in transition for renovation or boarding up. We were glad to see this facility was in the process of being restored.

But the renovations don't stop at the archway and they started just in time for the winter season. So let's talk about this steel flagpole. The foundation was in remarkably good shape. The counter balance Counter Balance Foundation system (coder-pin system for tilting the flagpole down) was still in tact. Typical steel counter-balance poles are rusted closed. This is not to say the pole did not have wounds from wear and maintenance. But what was more surprising was the new halyard (rope) Polypropolene Cut to length, the new cleat 9" Cleat, the new truck and ball top.

It was as if this place had answered the FlagRunner's prayers and faced their flag flying with a pious swift hand of justice. What remains is an untapped beautiful mansion. FlagRunners owe a thank you to George and Rebecca Barnes Foundation as well as Senator John A. DeFrancisco for giving their people a flag to follow.
Posted by Unknown at 11:20 PM