Home » Flag News » Flag of the Day » Flags » Rules for displaying the U.S. Flag; A Look at Hydra Force

Rules for displaying the U.S. Flag; A Look at Hydra Force


What are the proper rules for displaying the American Flag? Here is a quick look at Hydra Force, a company out of Chicago, Illinois. 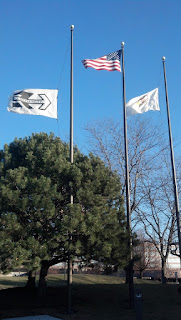 Here are the rules for outdoor displays. These are not all the rules, just the ones pertaining to flagpole displays:

7. Position and Manner of Display.

(d) The flag of the United States of America, when it is displayed with another flag against a wall from crossed staffs, should be on the right, the flag’s own right, and its staff should be in front of the staff of the other flag.

(e) The flag of the United States of America should be at the center and at the highest point of the group when a number of flags of States or localities or pennants of societies are grouped and displayed from staffs.

(g) When flags of two or more nations are displayed, they are to be flown from separate staffs of the same height. The flags should be of approximately equal size. International usage forbids the display of the flag of one nation above that of another nation in time of peace.


With three of the same height flagpoles and their proximity, Hydra Force, had somewhat of a problem properly displaying the flag. This Ford Q1, ISO certified company since 1985, has a commitment to quality. Based out of Chicago, this manufacturing company of hydraulic cartridges has grown to become a global presence in the mobile equipment community. So to stay within the confines of proper flag display and to fly the flags they way they feel best show the company's best practices and image, Hydra Force lowers the custom and state flags to keep the American flag at the highest most focal point. With the trees and in the context of this display, we feel is a unique and clever solution.

Alternatively, they can fly a smaller size custom and state flag. However, the Hydra Force custom flag has such a nice intricate design, it needs a bit bigger canvas to really be seen. Every flag display is going to have issues, there is not one way to fly flags, even with all the government regulations surrounding proper American flag display. Sometimes, a little creativity goes a long way.

Do you have a trick or two for your flag display? Let others know. Send us a comment or picture.
Posted by Unknown at 12:30 PM

Email ThisBlogThis!Share to TwitterShare to FacebookShare to Pinterest
Labels: Flag News, Flag of the Day, Flags