In honor of Veterans Awareness Week and in recognition of the recent and devastating Typhoon disaster, we'd like to take a moment to acknowledge a less talked about side of the military. When we think of Veterans Day, many times, we consider the sacrifice soldiers make in war time. But our military also acts as an aiding body in these times.

Reports indicate over 1,700 people have died and that number is expected to rise to over 10,000. The number of displaced people is estimated to be over 600,000. With staggering numbers such as these, it is difficult to know where to begin. But our military starts by deploying ships and supplies to start a relief effort.

Our government announced yesterday, Monday November 11th, the USS George Washington, an aircraft carrier, along with several other ships would be sent. Within 72 hours, over 7,000 troops 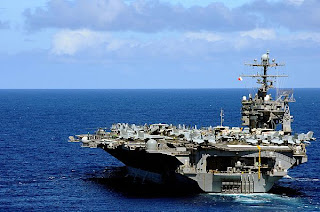 reached the victims with some battle cruisers, destroyers and 80 aircraft. This is a huge resource for the initial relief efforts in the wake of this natural phenomenon.

But man and equipment resources are not enough. The aircraft also brings the capability to distill 400,000 gallons of water a day. Along with food and medical supplies, this is a place to start. And many believe, a full recovery will not likely come anytime soon for the more remote areas of the region. 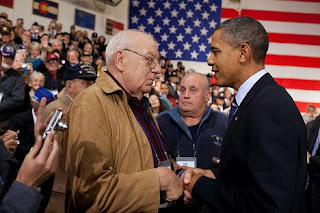 Sacrifice comes in many forms. The battlefield may be on the forefront of our minds, but disaster relief, aide, and protection is something our military give without a moments notice. And we are not alone. Several countries have responded with relief donations in man, supplies, and financial support. This week, we honor our veterans, and we also have the opportunity to see them in action.

In the President's speech to Veterans yesterday, he mentioned many things. But it would be nearly impossible to summarize all of the things our military does across all five branches. But we don't have to know every detail to be proud and fight for our veterans. As the president said yesterday,


"Three years ago, I promised your generation that when your tour comes to an end, when you see our flag, when you touch our soil, you’ll be welcomed home to an America that will forever fight for you, just as hard as you’ve fought for us."

One thing we can do for our veterans in all that they do, is fly the flag. It is something that flag flyers understand. It is why we just like people who fly flags.
Posted by Unknown at 1:48 PM