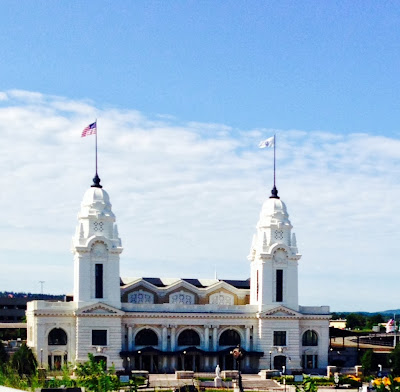 Continuing the tour of the north east coast, we head to the town of Worcester, Ma to look at their Union Station. This is French Renaissance style building was completed in 1911. The building replaced an existing union station with a tall clock tower. It was modeled after a the roman basilicas. Incredibly, this building fell into disrepair and was boarded up in 1972. It wasn't until 20 years later the Union Station Alliance was formed and began acquiring/repairing historic stations. Renovations began in 1995 and the station was reopened just 5 years later in 2000. The massive rehab cost $32 million dollars. The new Union Station is a hub from trains, buses and taxi transportation services. The two roof mounted flagpoles make the flags (American Flag & Massachusetts State Flag). visible for miles around and has become a signature landmark for the community once again.
Posted by Unknown at 11:55 AM