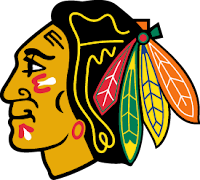 The Chicago Blackhawks have an unmistakeable logo. This image is plastered over Chicago this season as the Blackhawks just took the 2015 Stanley Cup. With three Stanley Cups in six years, there is cause to celebrate!

Ozinga (shown to the left) is an institution in construction for Chicago land. This family owned business believes in pushing the envelope; finding safer, greener solutions for concrete needs. As a family-owned Chicago-based business, it is only right the have a 50 ft. flagpole with a custom Ozinga flag. But they wanted to also use the flagpole to show their pride in the Chicago Blackhawks. This display flies across the lot from a huge 20ft. by 30ft. American flag which sits atop a pristine white 70 ft. flagpole. 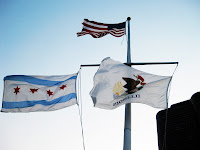 Chicago is a history of great symbols. The city flag is one of the best city flags designed in the country. In fact, we would say the city flag out ranks the Illinois State flag in design. The simple stripes and stars tell a story. As the hawks image, it is an mistakable marker for the city and Chicagoans display the city flag on most everything.

Today, the city of Chicago celebrates the next chapter in Stanley Cup history. On Friday there will be a parade. Flags will fly throughout to show support for the accomplishment of a dynasty. It is great to see a company like Ozinga take the opportunity to show their pride. What a great week to be a Chicagoan and what a great day to fly the flag. Congratulations Blackhawks!