Home » »Unlabelled » The Confederate Symbol in Flags; A National Debate in South Carolina

The Confederate Symbol in Flags; A National Debate in South Carolina 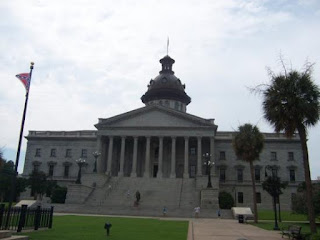 Today, protests are taking place at the capital building in South Carolina over whether South Carolina should continue to fly the Confederate Flag. This raises a lot of issues for our history and how we move forward through it. Racism is still a major topic in our country. We have seen debates of prejudice spark across the country. The issue of taking the Confederate flag down comes after the murder of nine black church members in Charleston, South Carolina.

This is an example of how a flag can unite and a flag can divide. The Confederate flag is stained on the wrong side of American History. In many ways, Slavery played an important role in the foundation and formation of our country; and we continue to pay the price for it. The Confederate flag is not only a symbol of slavery, the stars on the flag represent slavery states.

The symbols a flag portrays can change meaning over time. Flags evolve. South Carolina flew the flag over the capital to reflect a rebelliousness as well as an honor code unique to the South. But the Confederate flag can not be both a symbol of hate and bondage as well as a symbol of honor.

The swastika was originally a sign of peace in Hinduism, Buddhism, and Jainism. When Hitler adopted the symbol, he effectively changed it's meaning and relationship for the Western World. These symbols were removed out of respect for the victims of WWII. By this same token, we shoudl remove the flag over the capital.

If the South want to keep a healthy symbol of their heritage, they could take the elements of the Confederate flag, remove the references to slavery and construct a new design that moves the South forward onto the right side of History. There are many versions of the Confederate flag since its conception in 1861: The Stars and Bars, The Stainless Banner, The Blood Stained Banner, etc.

Racism is complex and national issue. History will pick sides. Flag flyers know the power the flag has over the community. Flying the flag comes with responsibility. A torn American flag can be as disrespectful as anything else. What we fly, how we fly it, is important to what we say as a country.

This comes from today's events and a previous post on the Confederate Flag...

Confederate flag will fly along I-95 - Richmond Times-Dispatch: City Of Richmond

This is in response to the article above–Virginia Flaggers are raising a Confederate Flag outside of Richmond Virgina with much criticism from the community.

A fellow flag flyer sent us this article this morning. While it doesn't go into much detail about the history of the confederate flag, it paints a good argument for both sides. The Virginia Flaggers are going to/have raised a 10x15 ft. confederate flag just off I-95, a prominent vantage point. The flag is not intended to be harmful in any way. However what the flag has come to represent is very emotional for many people. This article shows the intent of the Virginia Flaggers, but also the reaction of the NAACP.

This is not the first time the Confederate flag has thrown up controversy. WWII, after the battle of Okinawa, a Confederate flag was raised for 3 days before the general ordered the flag be taken down. This was not because of dark historical meaning, but because the confederate flag had grown in popularity to represent the soldiers of the south. General Buckner felt the flag neglected those soldiers from the north.

We say, See Your Community Through The Eyes Of The Flag. Flags are emotional and can inspire so many things both positive and negative. The reactions shown in the article above indicate just how prevalent those feelings are, even today after nearly 150 years. One thing is certain, flags make a statement. We should never forget who we are or our history. But we should not encourage the mistakes of our past.

I recently met a man who does Civil War reenactments. We spent hours talking about the authenticity of the events he was apart of. "People were much harder back then." He told me. "The uniforms are wool. They are heavy. I get rashes all over my body and I can not stop sweating." When I asked him why he did it, he said, "I'm a history nut. I don't know. It is crazy, but I get to relive some of the most critical moments in our history as a nation."

Do you think a Confederate Flag should be flown as a welcoming symbol to Richmond, VA?
Posted by Unknown at 10:10 AM