This is in response to an article sent us by a fellow flag flyer:
http://www.npr.org/blogs/thetwo-way/2013/10/01/228181759/what-shutdown-wwii-vets-ignore-barricades-to-see-memorial 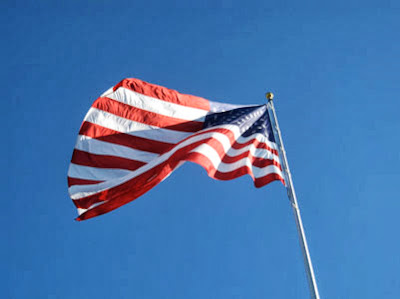 I was in my car this morning when I learned the government had indeed shut down. There has been so many "cliffs" it seems like if we weren't running toward one at this point, there would be something drastically wrong. It is tough to say what the true set back to last night's unsettled conclusion will be, but it seems the affects are already dramatic in not just an economical sense.

Our good friend and flag flyer signed up his father to partake in Honor Flight. This program sends veterans of WWII to view the monument in Washington DC (erected in 2005). The event takes place over several days as veterans and their families have the chance to let a defining moment come full circle after 60 plus years. The organization has grown every year since their first small voyage in 2006.

Several days a week, each year, a plane lands, full of veterans and their families. These people get off and proceed to the monument where a ceremony is held. And until today, this organization has had open access to performing this ceremony. The government shut down resulted in the closing of the monument. Steel barricades were put up to ensure no vandalism to these beautiful landmarks.

But Honor Flight had made a promise, regardless of the state of our government. They managed to distract police, remove the barricades and allow the veterans to enter for a particularly touching ceremony as tourists cheered their entrance. I can't help but think about these veterans–refusing to be turned away. They are not making a political statement. They are not hoping to be on CNN tonight. They just want to see those stars in the granite. For them, it is emotional, spiritual, and blessed.

Whatever you believe here, our culture predominately holds a value to honoring one's father and mother. These veterans may have succeeded, Honor Flight may have been able to keep a promise, but I feel ashamed that we have let these people down. We have not honored them as their children, we have made them fight their way in.

Flag flyers know a bit about values. We may want to point a finger to the next guy, but we are all to blame when those basic values are broken. No one is lily white. We have all been held to a standard we can not achieve. It is a hard thing to feel powerless and responsible at the same time. But in our government, you can always look forward to an ever changing point of view. Perhaps there will be a lesson in all of this. But what that is yet, I can not say with certainty.
Posted by Unknown at 3:46 PM