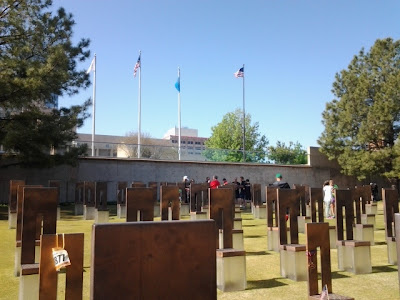 Today's Flag of the Day was taken yesterday just after the 13th annual Oklahoma City Memorial Marathon. The event was spectacular in so many ways. We ran the half marathon (full at 13,000 people). The full marathon had around 2,500 entries. The race included a few more events including various relays, a Memorial 5k and a kid's "marathon." There were activities for the entire city to enjoy. It didn't hurt to have one of the nation's largest Art Festivals the day before, just across from packet pick up. But what completely dwarfed the experience of the race and activities was the overpowering memorial just beyond the finish line.

The Oklahoma City Memorial Marathon is a run to remember, set up just 5 years after the Oklahoma City bombing of 1995 which took the lives of 168 people including 19 children. The destruction of the Oklahoma City bombing was so vast that it took over 40 days before all the bodies were recovered from the wreckage, completely arresting the city for over a month. While most of the destruction was focused on the Alfred P. Murrah Federal Building, the blast damaged 300 buildings within a 20 block radius. While the race is described as a celebration of life, it is also designed to remember those who were lost in the bombing--168 banners are hung on street lamps throughout the course, each displaying the name of a victim. Before the race began, runners stood in silence for 168 seconds. 3 additional seconds were then added for those killed in the Boston Marathon incident just two weeks ago. The respect and reverence the crowd gave was so powerful and strong, it was difficult to not be moved even before the race began.

After the race, many runners came into the memorial and left bibs, medals, and flowers on the chairs that represent the victims of the bombings. These chairs sit facing a pool which lies between two walls engraved with 9:01 and 9:03. This is the moment in time in which the bomb went off on April 19th, 1995. The chairs are arranged according to what floor the victims were on at 9:02. This design was created Butzer Design Partnership. It was part of an international competition and selected by a committee of family members, survivors, rescuers, civic leaders, and design professionals.

After the race, we walked through the memorial museum. The last room in the museum showcases an American flag. The headline over it reads something like, "This flag flew on the day of the bombings and remained in surprisingly good condition." Along with the survivor tree, these two pieces stand as witnesses to the event. But what this flag and tree also saw was a city that bonded together. People donating blankets, rain coats, food, water, and even haircuts to help in the relief effort. It was incredibly invaluable to walk through this museum as it humanizes the tragedy and makes clear the strong connection many people feel 18 years later.

Our flag is a symbol of remembrance, redemption, and hope. There is always a way to come together as one people in the face of tragedy, adversity, and terror. We feel lucky to be a part of the Oklahoma City Memorial Marathon and to see the community through the eyes of the flag.